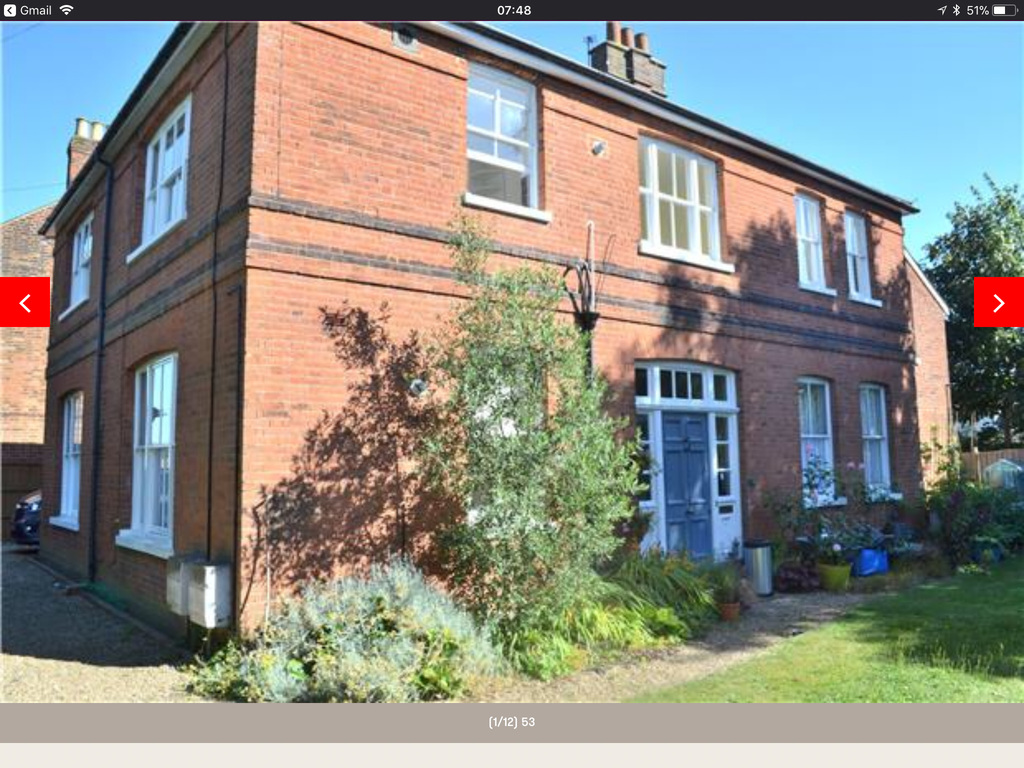 Our home is one of 4 flats in this lovely old mansion house. We have a separate entrance which you see on the photo

Please always feel free to make us an offer and we will answer all e-mails. We love to discover new places!
We live on the ground floor of an old Mansion house in a 2-double-bedroom flat with private garden and parking in the quiet and leafy neighbourhood of North London’s High Barnet, still connected to the Northern Line bringing you straight into central London.
We are a very child-friendly household with lots of toys, changing table, baby gate, scooters and a big private garden with a sandpit, playhouse and lots of space to run around and have familiy breakfasts and bbq's.
We are big music, vintage and art lovers which shows in our home as well. Feel free to listen to a massive music collection of the 60s, 70s and indie rock'nroll music. Flip through our coffee table books or watch some DVDs in English, German or Spanish.
The area is quiet and residential with a nice high street filled with little shops, restaurants and cafes.
There are many parks and lots of green spaces around (golf courts too), cafes, a nice shopping centre with a big Waitrose supermarket just across the road and cafes and restaurants or you walk 10 minutes to the Underground to be in buzzing London within half an hour.
There is also a bus stop just in front of our house that brings you to the station as well as to other places.
The bus number 234 brings you straight into the pretty Muswell Hill area of London in about 20 minutes.
You can use your Oyster London travel card for all the public transport.

Chipping Barnet or High Barnet is a market town in the London Borough of Barnet, England.
It is a suburban development built around a 12th-century settlement, and is located 10 1⁄2 miles (17 km) north north-west of London Charing Cross.
It is a residential, calm and green neighbourhood with a nice high street with lots of shops, cafes and eateries.
High Barnet is home to an Everyman cinema, the Barnet Museum, the All Saints Art Centre, the traditional annual Barnet Fair, which was chartered in Medieval times, the Ravenscroft local park and Barnet recreational park, a now disused well that was frequented by, among others, Samuel Pepys, and many restaurants and public houses.

Cuisines on offer include Italian, French, Indian, Chinese and south east Asian. Amongst the most popular restaurants are branches of Melange, Pizza Express, and Prezzo. High Barnet also has a number of coffee/snack outlets, both independent ones such as The Coffee Bean, as well as branches of Carluccio's, Caffè Nero and Costa Coffee.

The public houses and bars in High Barnet include: the Butchers Arms, The Red Lion, the King's Head, the Monk, the Black Horse, Ye Olde Mitre Inn, the Hadley Oak, the Nelson, and the Sebright Arms.[12] The large number of inns in Barnet was a matter of note in Charles Dickens's novel Oliver Twist; it was here that Oliver met the Artful Dodger.

The big and pretty shopping centre “The Spires” lies conveniently across the road. There is also a big supermarket in it called Waitrose.
If High Barnet is too quiet for you, hop on the London tube (10 mins walk or bus stop outside the house), and after only ten stops (30 mins) you are in central London!
We like it here because it feels almost like living on the country side but we are still so well-connected to London.

London centre is only a short tube-ride away!
Even closer is Camden Town with its vibrant music scene, pubs and night clubs, colourful markets and houseboat canals. And if you will be blessed by the typical London rain, why not visit one or two of the endless numbers of London museums? The best: They are all free! It is easy to spend days if not weeks in them.

We are a multicultural and busy family of six!

Our friends call us the Ms:
Mauricio is Colombian, I (Miriam) am German and our kids speak three languages.
Marnie is 8 years, Maisie 6 and the twins Mae & Marlow are 4years old ( in 11/2021).

We all love books, music, food, arts, crafts and being outdoors.
Mauricio and I have a big passion for anything vintage from the 1960s and 70s.

Both former photographers, we now work in different careers.
Mauricio is a facilities and administrative specialist for a human rights foundation and I am a worldwide air hostess for a major German airline. As a hobby I am a part-time actress, appearing in small roles in films and commercials.
At the moment I am mainly on parental leave to raise our lively bunch though!

We love good food, cooking and baking - despite our tiny kitchen!
And traveling of course! 🙂

We believe in what goes around comes around and are positive and optimistic people.

This member has completed 2 successful exchanges. Here are some members that he exchanged with in the past: